The Grady Twins
by Jaimie

The Grady Twins
by Shiena 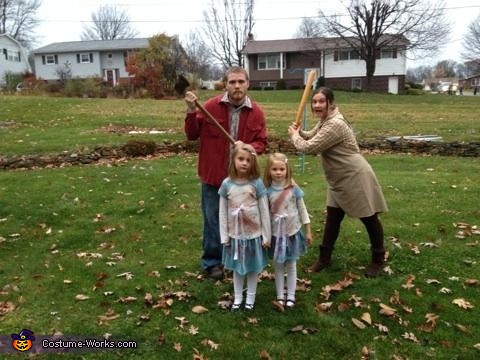 Friends from The Overlook

A word from Stevie, the 'Friends from The Overlook' costume creator:

I am a self proclaimed horror movie junkie! Last year I came up with the idea of doing costumes for my daughters that went together and since I love horror movies, I decided to dress them as Chucky and Bride of Chucky. Their costumes were an absolute HIT! They won the costume contest at their preschool Halloween party. After the awesome feedback that we got last year, I knew I absolutely HAD to come up with something to top it and I knew it would be very hard. While watching The Shining about 2 months ago, as soon as I saw the Grady Twins I just KNEW that they were going to be this years costumes. As I was brainstorming and coming up with ways to get their costumes together, I thought of how awesome it would be for my husband and I to dress as Jack and Wendy and do a whole SHINING theme with the whole family this year.
The first thing I had to come up with and I knew would be the most difficult was the matching dresses for the girls. After searching sites like Etsy for vintage dresses to no avail, I knew I had to find a way for them to both have the exact same dress in the right color. I ended up ordering the plain dresses from walmart.com but they were gray. I bought RIT clothing dye and dyed them myself. The color turned out absolutely perfect! To finish off their costumes I bought plain white leggings, long sleeve shirts for underneath, and the black shoes. I used a bobby pin for each that I wrapped in white ribbon for their hair. I also had to add the white ribbon to the front of their dresses as it was not originally a part of the dresses that I bought but I thought was a very important detail to the dresses from the movie. Lastly for the dresses, I laid them in the bath tub and splattered them each with some ! fake blood and VOILA, bloody twins! For Jack, I shopped at the Goodwill Store for a red button up coat and got a long handled axe from my father-in-law that is a fireman! Wendy was a bit more difficult as I couldn't find a bib overall dress ANYWHERE! Luckily, I have a wonderfully crafty friend who sewed one of for me from some khaki material that I bought. It turned out perfectly! Wendy's button up flannel also came from the Goodwill and I bought the brown leggings and boots from Walmart! Lucky for me, I share the same hair color as Mrs. Torrance so that worked out perfectly! I grabbed a wooden bat from a friend and all of our costumes as The Shining characters were complete! OH, I almost forgot that we put that stream of blood on Jacks head from the hit from Wendy's bat, although, I don't think the blood is visible in these pics.
The reactions were somewhat mixed. I was stunned by the amount of people that have not ever watched The Shining. Its an absolute classic! With that being said, the people that have seen The Shining were LOVING IT! The girls won the costume contest at the preschool Halloween party again this year! That was my goal since they won last year, too! Once we all made our way out to trick or treat as a family, all in costume, everyone said we were a dead wringer and that we nailed it! The reactions on my facebook page were amazing and many people shared our pics! Lots of people said that we "killed" it this year for Halloween and said that we do horror very well :)