The Fisherman
by Matt

Fisherman in a Boat
by Jessi 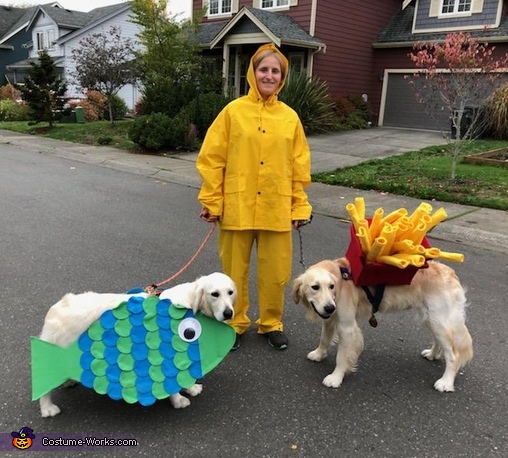 A word from Kelci, the 'Fish & Chips' costume creator:

The idea for Fish & Chips occurred to me over the summer when I was thinking about how my dogs are a very bonded pair, like two peas in a pod. But then I started thinking of what other, funnier pair they could be, which led to Fish & Chips. I had never seen F&C costumes before and liked that the theme was funny and unique, so I decided to make the dogs F&C for Howl-o-ween!

Their costumes were very popular in our neighborhood, especially the Fish's giant googley eyes! I was worried Lotus might try to eat Bodhi's costume, because she LOVES French fries, but she did not try to eat it (she is a smart dog). The only costs for the dogs' costumes came from the felt and googley eyes. Everything else (Amazon boxes, packing material, metal rings, glue, belts, etc) was found around the house. The Fisherman costume was a rain slicker.