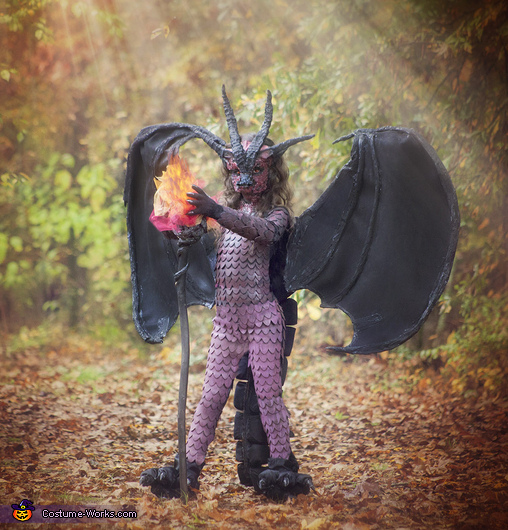 A word from Dyana, the 'Fierce fiery Dragon' costume creator:

My daughter, who is 8, wanted to be a creature again this year and wanted to be "cool" ;) She wanted to be something unique, we brainstormed, wrote down different creatures and she got so excited over becoming a dragon! We used 2mm black craft foam!! Its very cheap, we bought 2 $10 5ft craft rolls. We cut out lots and lost and LOTS of dragon scales and used foam glue spray to glue them onto an old black long sleeve leotard and black leggings. We actually wrapped her in different spots at a time in plastic wrap, then put the clothing on, then glued the foam scales on, then would do a different area and so forth, that way the article of clothing would already be stretched and wouldn't tear when she put them on and the plastic wrap was to be sure the glue wouldn't stick to her body. We just slightly over layered them to give a dragon scale look. We used craft foam to create the wings as well! We folded a big piece in half, drew the shape we wanted with chalk, and cut it out. I used 18 gauge wire ($2.99) and used electrical tape and hot glue around the edged of the wings and along the middle so the wings could bend. We used Velcro as straps for her shoulders and across her belly and used black duct tape to attach them to the center of the wings so we could adjust to comfort after she was dressed. We added scales across the top of the Velcro so that the Velcro would be hidden ;) We also used hot glue to make designs to give a kind of worn boney look to the wings and then painted over the glue with black. We used tinfoil to make little horns for the tail, hot glued them along the tail and painted them black as well. To make the horns on the head we used the same technique...We used tinfoil to shape them and hot glue to make ribbed designs along them and painted them black, we used liquid latex ($10) and just spread some onto a regular plate and when it was dried, peeled it off and used this in between the horns and painted them the same mixture as the scales. We created the dragon scales on the face by mixing water, glycerin and gelatin, adding Halloween cream in the color we needed and heated it. After heated, we used a medicine dropper and dropped little "scales" onto the counter. This takes very little time to dry and peels off really easily from the counter and feels and looks real! Not to mention this is super easy and cheap. I used masking tape ($3) to shape the dragon nose and nostrils and taped that to her face. We then painted her face black for the base color, then used black eye shadow to seal the black cream. Then we used liquid latex to glue on the scales one at a time onto her face. This way she was able to open and close her mouth and when she talked it looked very realistic! Everyone thought it was a mask and was very intrigued when told it was actually her face! We used the Halloween cream color and painted onto the foam scales for her body and then sealed it with mod podge. For her tail, which was my favorite part of her costume, we made this so when she walked, it would move with her! We used cardboard, old jeans and 5" soft foam. We shaped the tail from the foam and cardboard, cut it into different parts, covered the foam with black material and then glued it together onto the whole shaped piece of jean, being sure not to let each side of the sections touch so it would move! Then we attached the tail to the bottom of the wings using duct tape and hot glue for extra support. We used old black gloves, hot glued long Halloween black nails to the finger tips so she would have dragon hands! We took an old pair of slippers , so she would be comfortable walking, shaped some big feet out of foam, hot glued it to the slippers, covered it with black old material scraps I had with hot glue...(lots of hot glue lol) Topped her off with some dragon contacts and that's it! An awesome realistic looking dragon!! She had tons of people stopping her to admire her costume when she was trick or treating, even in the rain! Hope you enjoy this as much as we did!