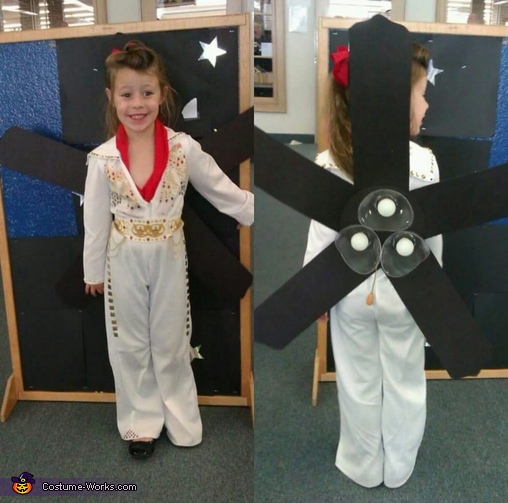 A word from Emily, the 'Elvis Fan' costume creator:

When my daughter, Scotlyn, told me she wanted to be an Elvis fan for Halloween I was completely dumbfounded. Where did she come up with this? How on earth can you make an Elvis Fan costume? So after pondering on it for a few days, the idea hit me, a play on words! I found an Elvis costume that was in desperate need of some jazzing up. I added more than 500 rhinestones (by hand!) to make it worthy of the King himself. For the fan I used a thick heavy black card stock. I traced our ceiling fan blades and used an sharp knife to them out. I also made a round base out of the cardstock. For the globes I found some small curvy party cups. The base of the light bulbs are a large gold washer, and the glass is ping pong balls. Of course, no fan is complete without a pull cord. I used ribbon to make backpack style straps so she could easily take it off and on. We were thrilled with the finished product! We spend a total of $30 on the whole costume, since we were able to reuse lots of items I found around the house. Everyone who sees it, loves it!