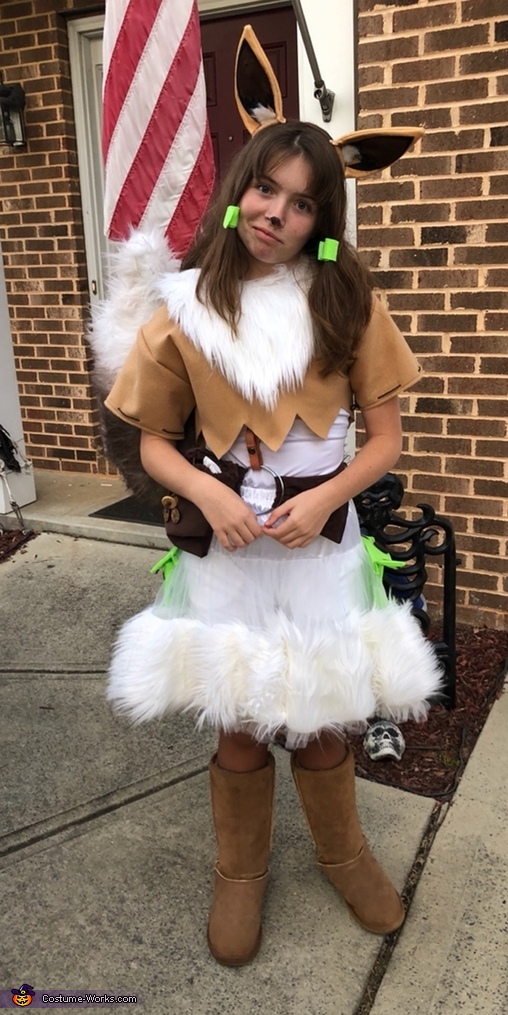 A word from Chris, the 'Dollightful Eeve' costume creator:

My Daughter loves the Pokémon Eeve. In her internet searches she found a custom doll that was made to look like a human Eeve. So we ventured to make her a costume that looked like the concept doll. The foundation of this costume is a white sports dry undershirt, white shorts, and a white layered puff skirt. The ears were found on line; a little faux fur was added to the ears. The boots are Uggs

The beige over shirt is made from felt and a faux fur is added around the collar. Under the fur is some pillow stuffing to give it a puffy effect. Some string was laced on the sleeves to finish the look. The belt and belt pouch are made from brown denim. The belt closure is simple 3 ½ inch rings. And the pouch has a draw string closure. Some buttons are used for decoration. The green pockets are made from felt. They are attached to the skirt with hot glue and these too are able to hold items like a cell phone. The fur on the skirt is attached with hot glue.

The hardest part of this costume was the tail. Eeve’s tail is about as big as she is in pictures of the actual Pokémon. Also, I could not find any color except white in faux fur that I liked. So, I needed to estimate a tail size and it was sewed together. Several ideas were used to color the tail, but all initially failed. In the end the tail was stuffed and a stiffener was put inside to help with maintaining the shape. After it was closed, the tail was misted with brown spray paint and combed over and over until the fluffy feel returned. The tail was attached to the belt and a string to the tip that runs under the beige top and attached to the front of the belt holds it up.

Because I am not too familiar with Pokémon, I found it amazing the reaction from the kids. The immediately knew who she was. One comment was that a teenage girl said she needed a Pokeball to catch her. From adults, the comments were that she was so cute, but they didn’t know what she was. Still, I have always believed if you wow the imagination of a child you have done your job costuming.