Cletus in an Outhouse Costume 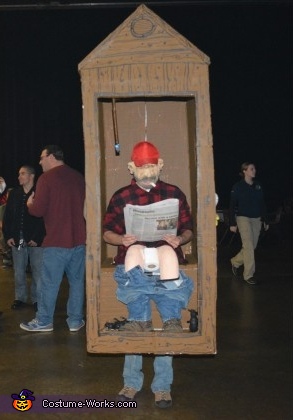 Cletus in an Outhouse

A word from Scott, the 'Cletus in an Outhouse' costume creator:

So every Halloween for the past five or six years I’ve been going all out on my costumes and it’s a hobby of mine to brain storm and put together new and exciting costumes. I usually think of stuff and brain storm new ideas many times throughout the year before September comes along (and then that’s when I really start to hardcore brainstorm but then usually put it off). What happens is around September I always want to start work on which ever concept I thought up or was influenced by, but what ends up happening is, I put it off until like a week or two before Halloween, which really stresses me out but at the same time I get excitement from. So this year I didn’t really have my heart set on any particular costume idea, so last minute I went through my costume ideas and came across several carry costumes and a grim reaper on stilts that looked like he was on a horse costume thing (hard to explain). I of course went with the one I thought would be the easiest to replicate but with my own twist which would be the outhouse. I looked around and found similar costumes (a porta-potty) so I decided I’d use this idea as the main concept, but instead I’d make it into an outhouse and have a hillbilly-looking guy inside of it.

So I will list almost all the materials I used and the steps I went about in making it and will also supply pictures.

First off, if you plan on trying to make this costume yourself, I have a few pointers. First, use a LOW TEMP glue gun, it will not only burn the Styrofoam like the HIGH TEMP ones, but I found it gives whatever you’re gluing a better bond, unlike if you used the hot one for whatever reason. Second, have a big enough space to make it in and don’t make it too big. I made the mistake not only making it too big, but making it in a bedroom where to doorway was too small to even get it through. What I ended up doing was cutting the whole costume in half down the entire middle, bringing both halves into my garage where I then cut about two inches on both pieces off and then re-gluing it. It was still bigger then I would have liked, like I had to carry it inside venues (wouldn't fit with it on) and putting it on inside instead of having it on as I walked in which would have given it a better entrance and wow factor, not to mention it wouldn't fit in my stepfathers truck bed so I had to use a family friends Suburban with the seats down instead.

First thing I did was cut out pieces for the main structure which was the outhouse. I had nothing to go off of so of course it was trail by error (made it too big, and other issues). I used a loose sharp large razor blade not in any blade holder so I could use more of the blade and have better control over it. These seemed to work the best as serrated blades or regular knives just didn't make as smooth of a cut as razors did. After a while, the finger I was using to press the blade down into the foam cute sore and started to cut into my skin so I just wrapped some medical tape and a cotton ball over it to cushion the contact.

So the next step was to make half of the potty shelf, cut a hole out for me to get into along with a contraption/support system for the harness to connect to. I went with just gluing PVC pipes and connectors around it. If you’re going to use D-Rings, I suggest putting the pipe through them before you glue the pipe onto the Styrofoam, instead of gluing them to the pipe itself, to give it better support (I made the mistake of gluing them and having them come off). Also make sure you get a 3-way connector for the dummy as you can see in the pics!
Glued straps as a fail-safe just in case the harness broke, plus they were good to hold when you needed to get the whole costume up on a table or when you walked so you could take stress off the glued points.

Next I finished the shelf and glued the d-rings (glued another set as another fail-safe).

Now, if you’re going to put accessories or anything of the like up inside like a lantern, calendar, lights, or whatever else, I advise you to glue them on now before you paint it. I found out that the paint I used wasn’t great at adhering to the plastic on the foam so almost all of my accessories ripped the paint off of the plastic and fell. So for the best bond for the glue, glue it to the plastic and not the paint! I then went ahead and painted it with a color I thought most resembled wood.

Next step is I started to make the dummy that would look like he was carrying me (my legs would look like his) Make sure he is proportionate so put the outhouse on and have someone mark on the back outside of where his head would be if it were a real person carrying it.

After this, I started making the fake legs. I went out and bought a smaller pack of foam and stacked maybe four to five together and traced a leg then made alterations to make it look real.

I then covered them in plaster and smeared it all over so when it was dry it would look smooth and realistic. When dried, I painted them and the head a flesh looking color, it was called something peachy.

I went ahead and started to finish the dummy. For that I just tried the trench coat on to see what it would look like, which it looked too flat so I bought bedding foam and glued it into a u shape onto the outhouse so it put push the coat out a little and give it a rounded look. Also glued some support for the main part of the dummy as seen in pics, but it didn’t hold up very well.

I also wrapped that bed foam around its arms to make it more realistic.

Next on the list was to set the legs in with the boots, boxers and jeans. I ended up just putting some Velcro on the top part of the shelf and bottom of the legs instead of gluing them so they would sit still. Also some Velcro on the sides so I could Velcro the shirt to cover the side openings. And glued some accessories (rat trap and rats).

Next was to put some artistic details into it such as the realistic wood and crescent moons on the sides. I also went ahead and finalized the head and dummy. I glued a dust mask, sunglasses, mullet wig and hard hat onto him, along with a safety vest. After this I glued the arms, coat and the scrubber onto the outhouse.

And that’s about it. I did tape a Swimsuit calendar on the inside, but that ended up falling off in transit. I also glued an old looking light up lantern and a fly trap. I also glued a bright LED lantern up in the front inside where no one could see so it would be bright enough inside to actually see me and the details. And I put the roll of toilet paper in-between the legs to hide the rings and harness.

So the first venue I went to, all went according to plan until about halfway through it. The front d-ring ended up coming off, so I thought I was in the clear with the second failsafe d-ring, but moments later that too fell off (mainly because it was glued onto broken up foam). So luckily I brought my glue gun with me and went ahead and glued both front d-rings to the pvc pipe (it’s flat and hard so it’s a better surface then the foam). This is where I should have just slid the rings onto the pipe itself to begin with! The dummies hands and coat started to come off too so I glued those back on as well. The lantern and LED light also came off.

So after this event, I knew what needed to be worked on and improved. I had a week until the next one so I had ample of time. I re-glued anything that came off and the stress spots of the pvc pipe and bottom of the outhouse which started to come loose. And I luckily had some paint left (get a gallon!), so I repainted where the lanterns came off because it ripped some of the paint off. I also bought some handles and glued those on as I wasn’t sure the straps would hold. After the fiasco with the d-rings, I went back to Home Depot and went on a hunt for something better. I came across these ¼ sized U-rings with bolts on them, what a great idea! They were great, because they had a flat piece which would have more contact to glue onto, and even if it did come off, the bolts would still be in place (tighten them when you have the harness hooked in) to hold it on!

I also recommend having it on for maybe an hour or two then taking a half hour or more break, because seeing IT IS insulation and having not only a mask, but a thick flannel on, IT WILL GET HOT!

It was a damn stressful and hectic project, but when was all said and done, I had a blast with it! Well worth it.