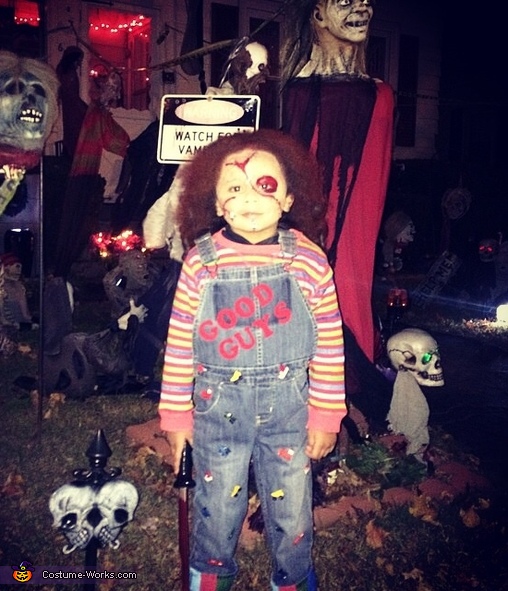 A word from Natalie, the 'Chucky' costume creator:

This year I decided to dress my son up as chucky. He loves horror films. I couldnt find a toddler chucky costume so I decided to create my own! I purchased the overalls and plain white shirt at Target. I then hand painted the stripes with fabric markers that I purchased at Michaels. I wanted the shirt to look Identical. This process of the costume was the most time consuming, I had to use four different colors, red, green, blue, and light blue. It took me like two and a half days to complete. I also purchased iron on letters at michaels as well and little cars, trucks, and boats. I removed the front pocket of the overalls that was kind of tricky, I've never removed pockets from anything. I had to be very careful not to cut the fabric. After I removed it I ironed on the words "Good Guys" that step was pretty easy it only took me like five min. When I was done with that I hot glued on all the little cars, truckad and boats. I decided to glue everything on because I didn't really like the painted on look on the overalls. It was 3 D and looked awesome. I'm glad I made the decision To purchase the items instead of painting them on. I also cuffed the bottom of the overalls and hand painted stripes as well. All is did next was hand paint the two front bottons of the overalls red. When I finally saw the outcome of my sons costume I was so excited. I made a replica of Chuckys costume. All my friends and family loved it!! We completed the look by adding red and orange spray in his hair. For his face I used liquid latex, I applied three layers. Once it dried I cut into it to make cuts all along his face. I added red blood in the cuts. For the stitches I used a black eyeliner pencil and I cut small pieces of tin foil to recreate the "staple" effect. His face took about twenty min to complete. The costume was a huge hit. On halloween all the trick or treaters stopped and took photos with Chucky. We got so many compliments, it made me feel so proud of myself. My son loved it so much that he didn't want to take it off. For now on I'm going to make all his costumes.