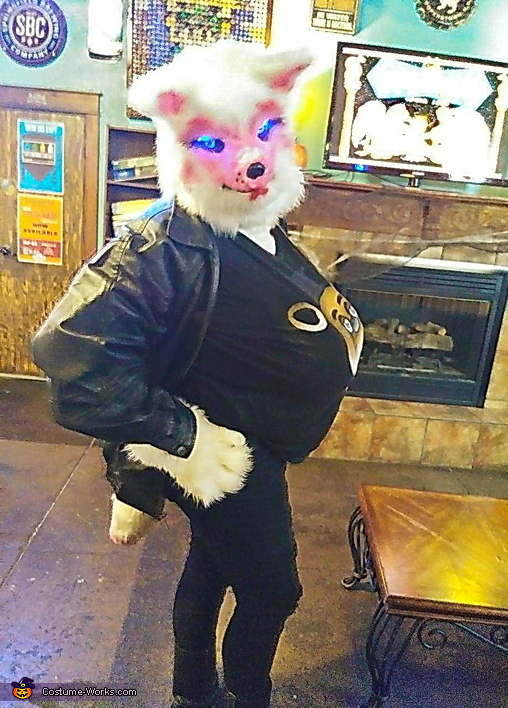 A word from Kavori, the 'Biker Funtime Foxy' costume creator:

I have been a Five Nights at Freddy's fan ever since they cam out, and always liked the look of Mangle and Funtime Foxy since they were introduced. Seeing as how the games have come to an end (according to the creator, Scott, at least) I decided to make a costume as Funtime Foxy this year, but more of what if she had gotten lose into the real world, what might she be? After I had gotten the head and tail finished, I got to joking around with some friends while showing her off at the local game expo the first week of October and they suggested she would make a great butch looking biker. Needless to say the idea stuck and this what what I came up with on a small budget.

For the head I started with a simple white fox $15 head base I found at Wal-Mart. The fur on it was rather long and shaggy looking so I did some trimming and a ton of brushing with a wire dong brush to de-tangle and remove any loose fur. I then took my airbrush using thinned acrylic paints to do the markings and fine details. I touched up the really fine details with a paint pen and brush a lot more to soften the fur back up for a more natural look. The LED eyes started off as a cheap $5 cosmetic LED kit in the Halloween section at Wal-Mart but after carefully working the wires in between the fur and the plastic head base and and lightly gluing into place above the eye it have the look I was wanting.

The tail was had sewn from white fur I found at Hobby Lobby for around $12 per yard, then stuffed with polyfill and lightly airbrushed with pink paint on the tip. The RBG LEDs in it were made from a $5 strip lighting kit for TV's from Wal-Mart which I reinforced with flexible plastic I has laying around from old packages. The connections and controller board protected with harder plastic from old CD cases. The tail is powered by a basic 2.1 amp USB battery pack for phones and can be set to random, or preset colors via the IR remote included with the kit.

The hand paws are also hand made from the white fur and the paw pads are foam stuffed felt. the fur was left long to give the fluffier fox like look.

I had originally made foot paws as well using the same fur and old shoes and couch foam for shaping as well as old gym floor mats for the soles, but they were rather toony didn't fit the biker look I wanted so I went with my old riding boots after repairing the insoles and a thorough polishing.

I dug out one of my older style leather jackets and had to clean and redye the leather in some scratched areas then I weather treated it with some extra wax I had to give it a fresh shine again.

The Freddy Fazbear shirt was given to me a while back by a friend that had bought a bunch of FNAF shirts but didn't like that one as well as the others. I thought it fit the look and so I went with it.

The jeans I found at Walmart as well for about $11 and thought they fit the style I was hoping to achieve.

All together I would estimate I spent about $75 making this costume. My budget was to stay under $120 so I'm glad that worked out well.

The photos were taken on my Canon 70D at ISO 25,600 in low light then edited with ACDsee Pro to give a grainy look I wanted the generic security camera feel as it fits the character, and holds somewhat true the FNAF games in look.

I know this was lengthy but I like to give in site to how I put things together to give ideas to help others with their creations. Hope you all Enjoy!