Lumiere from Beauty and the Beast
by Morgan

Cogsworth and Lumiere
by Yvonne 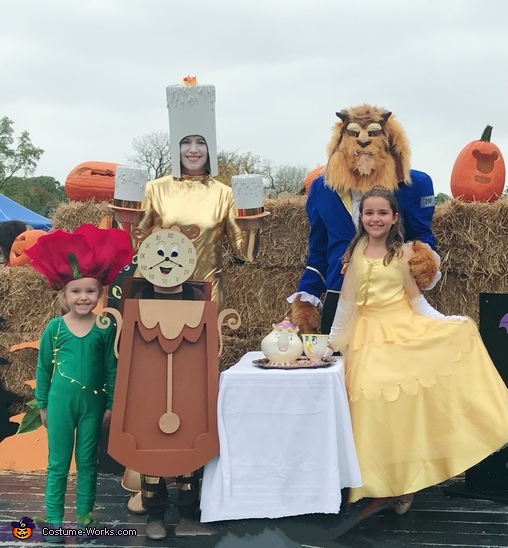 A word from James, the 'Beauty and the Beast' costume creator:

I'm nominating our family for our themed costumes, Beauty and the Beast. This was a joint effort for my wife and I. (Beast was store bought, but the rest were handmade.) Lumiere was constructed using sour cream containers, plastic plates, oatmeal containers, spray paint, and hot glue. They were topped off with LED flickering candles. The head piece was made from concrete post form tube, a piece of cardboard from a pizza, hot glue, spray paint, colored tissue paper and an LED flickering candle. We cut a plastic bowl in half and added elastic for the "base of the candle" and worn on the lower half of Lumiere's legs. Shoes were spray painted gold to match the unitard. Belle's dress consisted of 2 different types of yellow/gold fabric, sparkly tulle, and little gold beaded accents that were glued onto the dress. A gold ribbon was added down the front of the top part of the dress, and wrapped around her bun to match. The tulle slip made the dress much more full. The enchanted rose was made from a silk flower that was cut from its base and a hole in the center, then glued to a red hat. The leaves from that same flower were cut off and tied to green piping to attach to the shoes and the sleeves of the green unitard. Shoes were spray painted green to match. The enchanted rose also had a small string of battery operated lights to add to the majestic aura of her powers. She also had a "glass dome" made from a clear dome umbrella with packaging tape and clear plastic to give it length. Last but not least, Cogsworth. His body was made out of light-weight wood pieces cut to the shape of the character with a working pendulum and 2 colors of spray paint (brown and gold). There is foam covered in fabric for padding underneath the wood and our son wore it like an "A frame" with heavy duty straps and snaps. On the back piece, more wood was added to create a "wind up/turn key." The head was made out of a hat box turned sideways, a clock attached and the Cogsworth face was hand painted on, then real minute and hour hands were added. The scrolling pieces were painted and glued onto the top of the head piece and the sides. Gold duct tape was used to mimick the look of the character and attached to the clothing. The shoes were spray painted brown to match the costume color. The teapot was inherited from our children's grandmother who passed away 2 years ago. We bought Chip to keep her company. A white tablecloth and silver tray were used to (along with a push cart) for the teapot and cup.