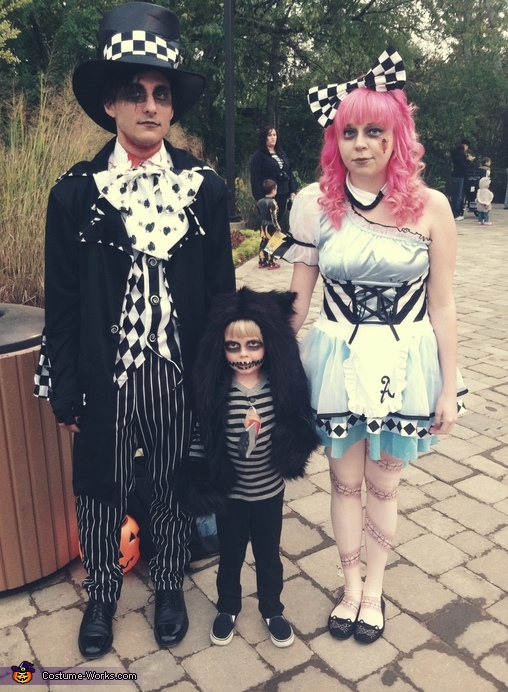 A word from Rachael, the 'Alice in Zombieland' costume creator:

"Off with his head!" Mad Hatter seems to have lost his head (just as the Queen wanted), as well as Alice and Cheshire Cat seeming to get affected by this whole "dead" thing as well. They have all come back as the undead little weird "family" that they are.

Source of the Costume Idea - We love Alice in Wonderland and also all things creepy, including the Littlest of our family. He was actually more excited to be the dead Cheshire Cat, than I think anyone. We pieced together a couple darker Alice and Mad Hatter costumes with things like stitched tights for effect and zombie wounds (slit throat and bullet holes). We did zombie makeup, including the Littlest's creepy Cheshire Cat mouth over his whole real mouth with a bullet hole above it. We created the Cheshire Cat costume ourselves with separate materials: an extremely furry black cat hat with ears and scarf paws, ripped striped shirt with a realistic knife sticking out of his chest and black pants with a sewn cat tail twisted into a curl. There were a ton of details put into this whole family costume idea.
Overall cost: about $150ish for the whole family (this includes our dog as the tiny undead white rabbit, but he wasn't allowed at the event pictured)
Dad - Undead Mad Hatter
Mom - Undead Alice in Wonderland
4 year old - Undead Cheshire Cat