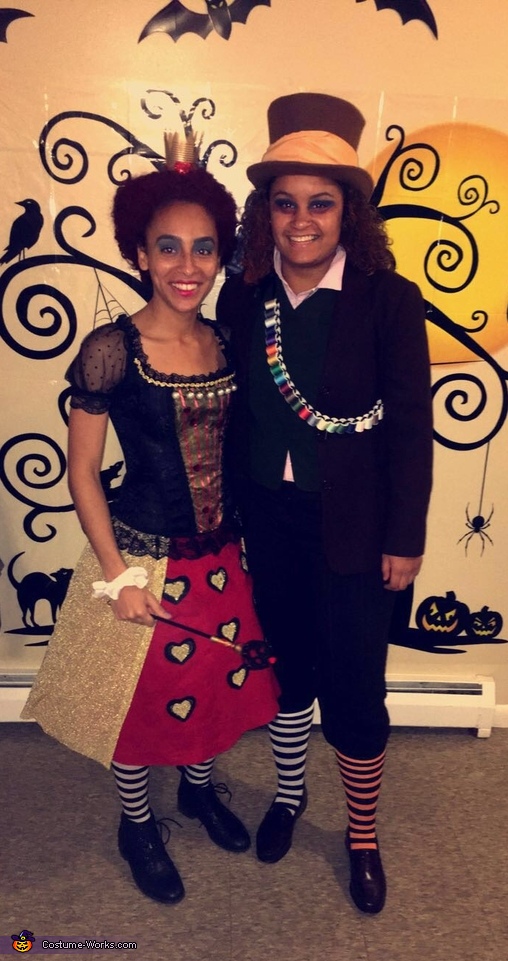 The Red Queen & The Mad Hatter

A word from Adriana, the 'Red Queen & The Mad Hatter' costume creator:

These costumes are being wore by me & my best friend. Halloween is my favorite holiday of all time & I love putting together character costumes. In this photo my best friend & I are Alice in Wonderland's Red Queen & the Mad Hatter.

For the corset I painted the middle section with the gold fabric paint. I gave it a few coats because the paint was a bit dull. Once that dried. I used the glue gun to glue the strips of ribbon on top of the gold section. I then glued the red hearts on top of that section as well wherever I felt looked nice. I took the gold trim & glued that to the drop neckline of the corset. Once that dried, I attached the jump rings to the pearl beads & then attached the jump rings to the gold trim on the neckline. This was very tedious because the jump rings were so small & the beads were getting in the way.

For the skirt I first measured the glittery fabric to see how it could lay over the over the skirt, while also leaving the front part open. I then folded over, about 2 inches, what I made the top of the fabric & hot glued it across. I took the elastic waistband & tied it around my waist. I tied it around my waist & had my mother cut the bottom where the red skirt & the glittery fabric met. Once that was done I began cutting out the nine hearts that are in the front of the skirt. I glued those on & with the leftover glittery fabric I cut out smaller hearts than the black ones & glued those on top.

For the crown I started by cutting triangles all around the top of the cup to look like the points on a crown. I then spray painted the cup with the gold spray paint. I had to do this twice because the first time I painted the cup I think I was a little too close & the cup wilted, so don't get too close when spraying the cup. Once that dried I took the heart stickers & stuck one big one in the front of the crown & 3 smaller ones around the rest of it. I then glued the bottom of the cup to the top of the headband.

For my hair my mom used A LOT of bobby pins. She rolled my hair into something like a donut & began putting pins everywhere. She then took red hair spray & sprayed it all over my hair. WARNING: that part is the messiest of the whole costume creation. The white wristbands I already had from a previous costume. The socks I also already had, as well as the boots. The wand I got from Party City, it was $8.99.

The only thing that we made ourselves for the Mad Hatter costume was the thread bandolier. We bought 3 packs of medium sized rolls of thread from Wal-Mart: they were about $2.99 per pack of 8. We then took two pieces of ribbon & wove through both sides, almost like lacing up sneakers. Once we got to the end of each side we tied a knot & left enough ribbon at the ends to tie it around her upper body.

The brown hat, brown blazer, green under vest & pins striped pants we got from Savers. She spent about $15-20 on everything. The pink shirt that she wore under the vest was from her own closet, along with the socks & her shoes. She also sprayed her hair orange, again very messy!

Unfortunately, we didn't take too many pictures, but we did enjoy putting everything together. More so me than her lol