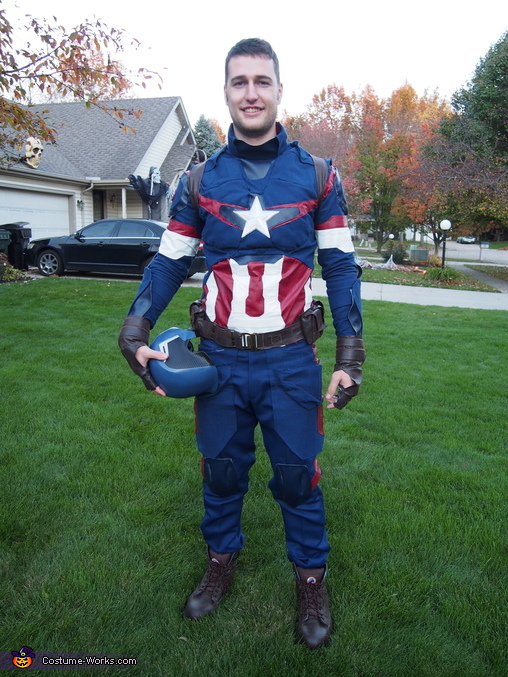 A word from Alex, the 'Age of Ultron Captain America' costume creator:

Hi everyone! This year I made a replica the not-yet-released Captain America suit from the upcoming The Avengers 2: Age of Ultron movie. This was my first attempt at sewing, so there was a lot of trial and error, but somehow I was able to finish it in time for Halloween. I was inspired to make the new suit because I am currently living in Cleveland and was fortunate enough to catch glimpses of the filming of the movie and have been excitedly awaiting it ever since!

The costume is nearly entirely made from scratch, with the only two exceptions being the shield and that I tailored a pair of existing pants and then added the pockets, armor, and knee pads to them.

For the suit, I used a blue denim, heavy white cotton, and red/brown pleather from JoAnn's. I was unable to find any patterns that I thought would work as a starter, so I based the sizing off of one of my t-shirts and made the patterns from there.

As for the hardware, I found a few cool belts at a local thrift shop to use for the buckle on the belt, and 3D modeled the star and Avengers shoulder patches on Solidworks and then 3D printed and painted them before adding them to the costume. I made the strap buckle on the back by laser-cutting plexi-glass scraps at my college's prototyping shop. I created the helmet out of Worbla modeling plastic and finished it with Bondo body filler before painting it.

As far as cost goes, it was relatively inexpensive with the most expensive item being the shield. I was fortunate enough to get the fabric on sale so the total cost was roughly $90.